Expanding on the Rich History of the American Embassy through Sensible, Integrated Design

Expanding on the Rich History of the American Embassy through Sensible, Integrated Design 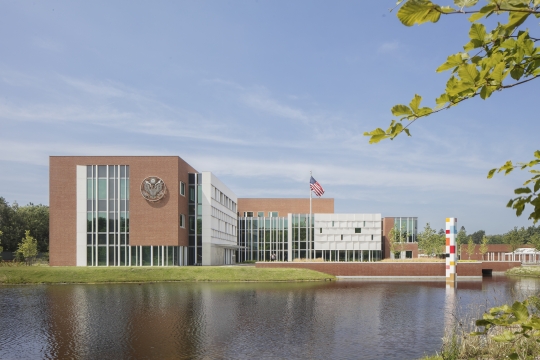 Did you know that the very first American embassy anywhere was established in The Hague, Netherlands, in 1782 by John Adams, who became the first U.S. ambassador? The American embassy had several homes over the years, but starting in 1959, it was housed in a beautiful Marcel Breuer building in the heart of the city. Unfortunately, nearly 60 years later, the Breuer building no longer met the embassy’s program and security needs. In 2010, Moore Ruble Yudell was selected to design a new, larger embassy campus outside of the city center in the town of Wassenaar, a suburb of The Hague.

The selected site has an equally compelling history. Towards the end of World War II, the German military occupied The Hague, including the future embassy campus site and adjacent properties—the site was right in the middle of war activity. When the U.S. Department of State (DOS) performed its due diligence on the land in 2009, a 500-pound unexploded British aircraft bomb was discovered approximately five feet below ground. Fortunately, it was safely excavated, removed, and destroyed with the assistance of the town of Wassenaar and the Explosive Ordnance Disposal of the Netherlands Armed Forces. A happy outcome of the safe bomb removal and site cleanup was that the embassy received a LEED point for brownfield redevelopment. 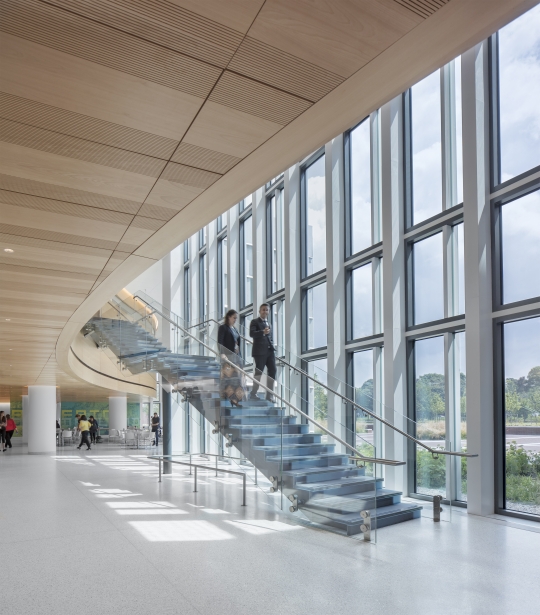 Designing the new embassy as a green campus was a high priority for the project, with a DOS requirement of obtaining a minimum LEED Silver Certification. We are hopeful, though, that LEED Gold Certification will ultimately be obtained—it is currently under review, and we should know soon. Both integrated green design and sensitivity to the neighbors were key goals that influenced just about every design decision.

One notable sustainable initiative was the incorporation of LED site lighting. This is the first U.S. embassy to have LED lighting installed throughout the entire site. The design team was tasked with studying LED technology and proving to the U.S. Diplomatic Security Service that the technology not only saves on electric bills but also is much more efficient—lower LED light levels still have high enough output to provide the necessary light required for site security. In response to our study, specifying and installing LED site lighting is now the DOS Bureau of Overseas Buildings Operations’ standard for all future projects.

The incorporation of geothermal heating and cooling (also referred to as ground source heat pumps) was another significant green initiative. By leveraging the temperate conditions of the soils and the high water table, the project will have an annual cost savings of 34.6% below the baseline.

Protection of local ecology was achieved by preserving and transplanting 45 existing trees, donating 65 more existing trees to the town of Wassenaar, and planting 268 new trees across the site. In addition, a “critter crossing” was constructed beneath a vehicular bridge to allow safe, separated crossings of the canal for squirrels and other local animals.

To allow equal access for all, including those in wheelchairs and travelling on bikes, the facility was designed with enhanced accessibility in mind. Walkways, ramps, stairs and other circulation means were designed above and beyond code requirements. Additional site wayfinding signage and areas of refuge (interior and exterior) were incorporated as well. 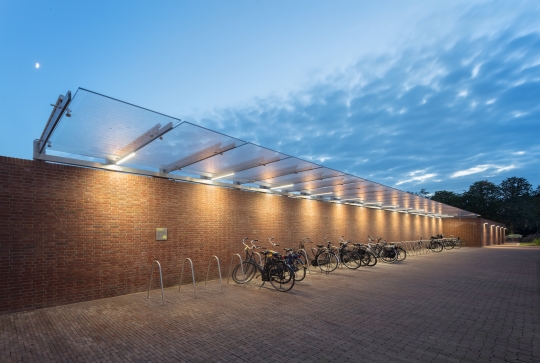 The Dutch are probably most known for their canals and bikes. The Dutch system of canals is a highly sophisticated, heavily controlled, engineered system of regulating and mitigating storm surges. The new embassy site stormwater is collected in a series of new canals, underground pipes, and a pond that connects to the larger nation-wide canal system. Many may know that the Dutch has a large biking community, but many may not know that approximately 15,000 bikes end up in the canals each year and need to be fished out—this has become such a problem that a “bike fisherman” is a profession in the Netherlands. To support the large population of bike commuters and to encourage bikes to not be tossed into the canals, 164 bike parking spaces are provided across the site.

Thoughtful design is fully integrated. Thoughtful design is one where all the pieces work seamlessly together—if one piece is changed or removed, the system is broken. For the U.S. Embassy in The Hague, every component of the design had to be well thought-out and fully integrated. The end result is a beautiful, functional, safe, and sensible facility for the American and Dutch employees to enjoy daily.

This project has been my primary focus for the past eight years (half my career!) and brought me to the Netherlands ten times during that period. During those years, I also met and fell in love with my husband, got married, and had a child. The opening of The Hague embassy, my architecture “baby” project, in early 2018 coincided pretty closely with the birth of my son, who was born in late 2017. So the ribbon cutting of the embassy symbolizes much more to me than a new facility for Americans and Dutch to call their office—it is the bow on top of both my professional career and personal family life. 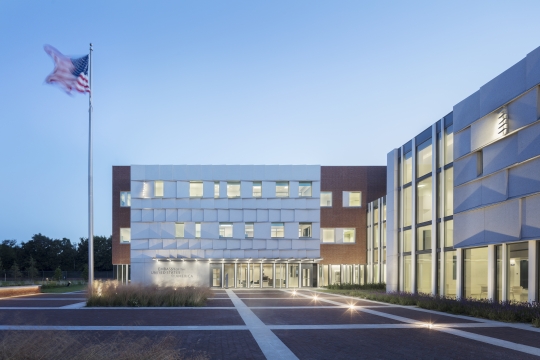