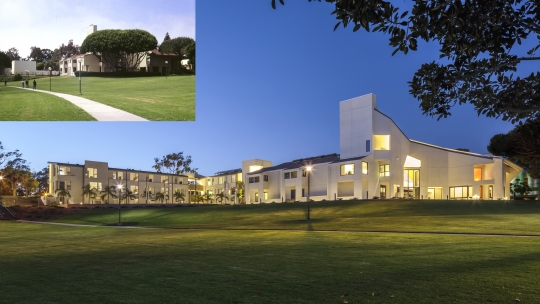 A few years ago, the University of California, Santa Barbara, tapped us to carry out the renovation, adaptive use, and expansion of its Faculty Club, which Charles Moore had designed with MLTW in the 1960s, one of the first exemplars of postmodernism’s eclecticism. I believe we got the job because of our personal connection to Charles and to the unconventional spirit in which he designed the building. Staying true to that spirit was at the core of all our decisions—which meant our solutions weren’t conventional either. To save the Faculty Club, we had to transform it.

The university moved to its present campus in 1954, taking over 408 acres on a shoreline mesa, previously part of a World War II Marine air base. For practical reasons, the institution repurposed many of the barracks and other structures left over from the military days—undistinguished boxes built to be nothing but pragmatic. But when the faculty club members decided to construct a dedicated building to host faculty and staff gatherings, they decided to commission a bold design from a major architect—something that would be appropriate for an international center of learning. 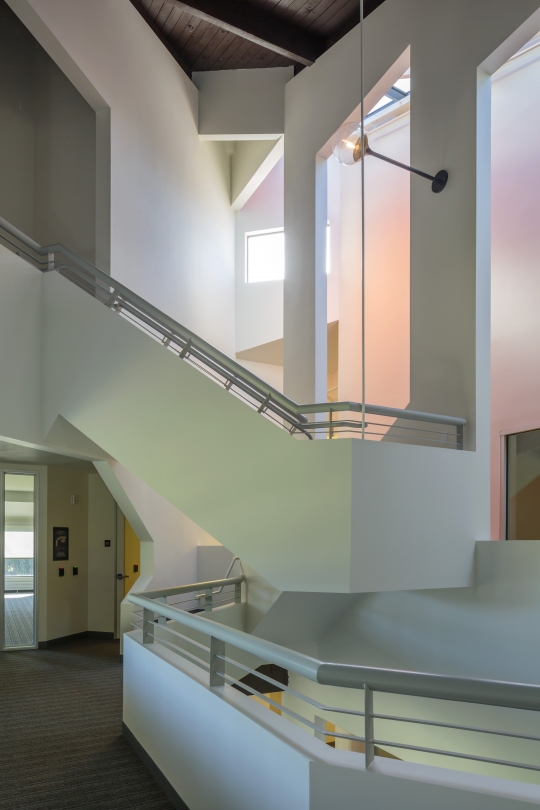 Led by its president, Steven Horvath, the club chose Charles Moore for his humanistic, free-spirited, highly creative architecture. Moore understood designing for coastal locations, after all, having gained fame for Sea Ranch, and he was an academic himself, then a professor at the University of California, Berkeley.

Reactions to the design varied. Some faculty members found it glorious and beautiful, a modern contrast to the drab structures on campus. Others reacted negatively. One history professor wrote that it evoked a feeling of “too much space and light.” Some even interpreted it as a deliberate joke: a witty fountain in the courtyard was jackhammered out. Whatever else, it fulfilled the architect’s intention to stir the senses, and became an icon for the campus and, eventually, for architects everywhere.

Although Moore’s buildings were brilliantly designed, their complicated construction and experimental nature left them particularly vulnerable to the passage of time. The Faculty Club was no different, and deferred and piecemeal maintenance over the years compounded the problem. As the university grew, the demands on the building as the campus’s “living room” grew as well, straining its capacity.

When we received the assignment to fully renovate it and double it in size, adding guest rooms and increasing dining and meeting space, we took Moore’s sensibility and pushed it even further. We assembled a detailed digital model of the original structure, but we studied the design using a ¼-inch cardboard model, just as MLTW would have done. 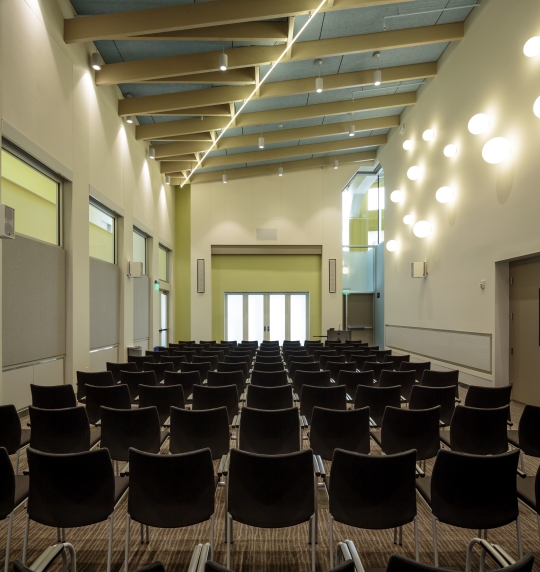 For Moore’s unconventional mind, the Faculty Club was an evolving idea right up until they hammered in the last nail—in fact, adding the mounted animal heads occurred to Charles late in construction, after he discovered them in an estate someone donated to the university. In terms of preservation, what we’ve done is as experimental as his original design: celebrate the original design but radically change the way the building functioned for contemporary use.

The main part of our brief was to add 30 guest rooms, turning the building into a small hotel. It made sense to place a new three-story wing of guest rooms on the west side, but that meant removing the patio, pool, and changing rooms. That was a big change, but if we’d kept it all, the guest rooms would have cast shadows on the pool, and the swimming pool was the aspect of the original design that was the least relevant to the university’s current needs.

To attach the guest-room wing, we took out a small two-room tower and replaced it with a connecting stair tower. An open-air rotunda was removed and then rebuilt as enclosed space with a skylight. On the north side, we put in a new stairway, which breaks up what had been a large blank wall and provides a gracious entry into the dining room from the guest rooms. In doing so, we removed the original dining room stair—one of two significant revisions to the iconic image of the building.

The second was to enclose the open courtyard, a damp and moldy interval at the heart of the complex. We covered it with a roof and skylights to protect it from the elements, turning it into a multipurpose room. Two stories high, contemporary in style but retaining the spirit of the original building, it’s now a place that can comfortably host wedding receptions, lectures, performances, meetings, and other gatherings and events. 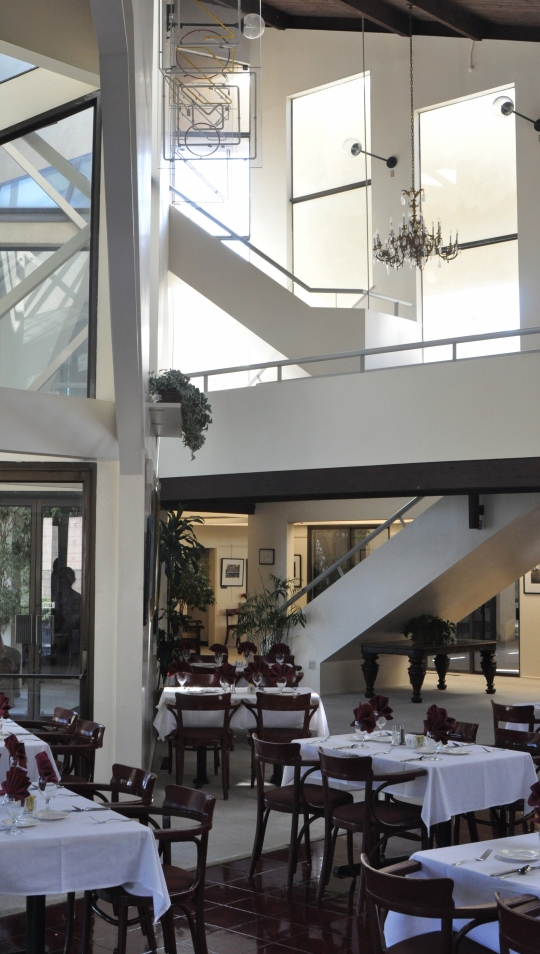 Our work on the main dining room mostly involved restoration. But even here we felt transformation was called for, so we added color into the layered set of walls that frame the space, hidden from view as you look out from the center. The sun coming in through high windows lights up these color spaces, creating a glow that heightens the perception of the layered poche of structure surrounding the dining room. After all, the Faculty Club opened just as Charles Moore started putting color into his projects. If he’d kept the design going for another six months, we believe the Faculty Club would have had the same colorful presence as its successors.

As a firm, we’ve always tried to embody the sense of immediacy and spontaneity in Charles’s work, even as we strive for a long and useful life for each project. For the Faculty Club, we wanted to do so in a way that wouldn’t contradict the original spirit of the building. Like a perfect dancer, you aim to land on your feet in a beautiful way, after having done something crazy.

Our clients wanted to ease up on some of Charles’ eclectic décor features—no moose heads—but the brilliance of the essential architecture shines through. That’s one reason we wanted to do something unexpected, like adding color, recharging the space to fulfill the potential of the original. We weren’t trying to channel the master, the way Taliesin tries to channel Frank Lloyd Wright—we wanted a conversation with Charles’s original thoughts about the building, responding rather than mimicking. Our goal was to breathe new life into the Faculty Club in a way that was appropriate to Charles Moore’s one-of-a-kind sensibility. We hope he would be pleased. 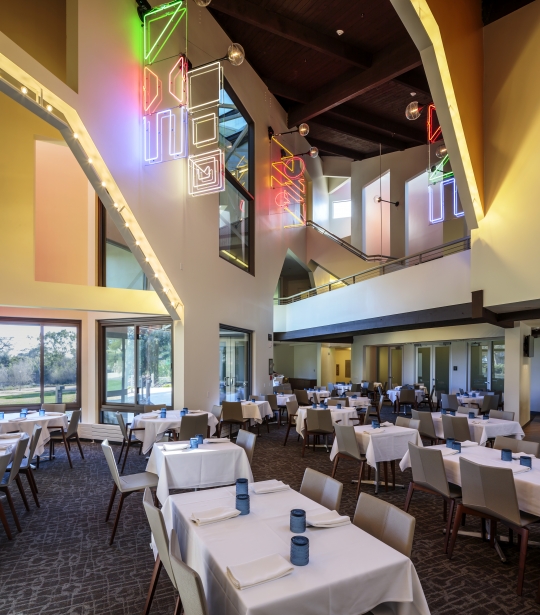