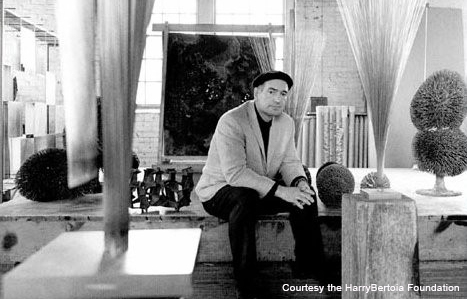 I’m a Harry Bertoia fan and geek. What can I say? I love timeless midcentury design and art. I met his daughter, Celia Bertoia, last year and effused about my collection of her father’s work, as well that of as her brother Val. I found out she was producing her father’s jewelry as well. So, of course, I had to have the ring that Harry Bertoia designed as a test piece for his own wedding. I wear it always.

Last year also saw the publication of Celia’s biography of her father, The Life and Work of Harry Bertoia: The Man, the Artist, the Visionary. Recently, I had the chance to interview her about her work shepherding her father’s legacy. Part I of the interview covers what it was like growing up as the daughter of such a “wildly creative spirit,” as she puts it. Part II will cover his monoprints and jewelry and her experiences writing the biography and establishing the Harry Bertoia Foundation.


What contemporary architects/designers/artists do you see or know who are influenced by your father’s work?


Architects as a group, no matter what their style, seem to know and love Bertoia. Those who pay attention to midcentury modern, of course, pay particular care to Bertoia, Eames, Saarinen, and similar greats. Bertoia in particular was loved by the architects of his era because he had great ideas, came in on budget, and delivered on time. Who does that today? Every time I give a lecture, I’m often surprised at the number of up-and-coming designers and architects who have studied and admire Bertoia. One young sculptor came to a book signing and spoke to me privately afterwards. He was almost in tears as he told me how my father and his work had changed his life. Seeing how Bertoia moved from getting a fifth-grade education in Italy to being a world-renowned sculptor and designer had inspired him to drop his day job and go full time in his artistry.


What is it like for you to see your father’s work and your family name known throughout the world as an icon of modern art and design?

As a child, it didn’t occur to me that the Bertoia name was anything special. In fact, I felt a little odd about all the Smiths and Reinharts who resided in Pennsylvania while there was only one Bertoia family in the whole state. As I became an adult, I did not run in circles of design or art, so my father’s fame still didn’t really hit me. Two things changed that. One was my first visit to Italy to my father’s natal village and the local cemetery there. Seeing all the other Bertoias and Bertojas on the headstones filled me with joy and love to know that I was no longer the “ugly duckling,” but rather part of a beautiful heritage.

The second incident was when a friend in Montana, upon hearing how I was related to Harry Bertoia, gasped and said, “Oh, you mean THE Bertoia who made the chairs?” I realized that he was an icon. From then on, I felt proud and honored to hold the same name, and kept it when I married. I love it whenever I see his work in a magazine or on a TV show. It reminds me of my dad, and I get a warm feeling.


I understand the Bertoia family and Schultz family grew up as neighbors and friends. Can you tell us how Harry and Richard became inspirations to each other?


Richard and Trudy Schultz became dear family friends with the Bertoias when Richard worked with Harry for a year or two. The Schultzes lived just a few miles down the road. Trudy befriended Brigitta, who did not drive, by taking her shopping once a week. Dick always deferred to Harry, seeing him as his boss, a mentor, a creative genius, an amazing man. Harry was an incredibly hard worker, could always figure out a solution to any engineering or logistical issue, and did not pay attention to words like “impossible” or “can’t.” Dick was inspired by Harry and took his characteristics and skills to heart.

On the other hand, Dick was a great sounding board for Harry, one of the few local folks he could talk to and share with on an equal footing. Dick took the time to stop in the shop on a regular basis and give Harry a chance to discuss art, life, work, whatever. Because of his excessive work hours, Harry had few “normal” friends—those he spent time with regularly—but Dick was definitely one of that category.


How did Harry’s childhood in Italy influence his life and art?


Growing up in rural northern Italy had a profound influence on Harry’s later life and work. It is a beautiful, quiet country where agriculture and love are rampant. The sunshine, the grapevines, the tough work ethic, the childhood chores all impacted young Arieto (“little Harry” in Italian). His family, rather musically inclined, frequently had impromptu jam sessions with their accordions, cello, horns, voices, and whatever instruments they could drum up. Harry was not particularly musical, but he loved those evenings. He always mused that there must be a way to create an instrument that did not require years of training and lessons. Thus, eventually, came Sonambient. An eight-year old or an 80-year old can be an instant maestro on a sounding sculpture.


Harry, similar to most wildly creative spirits, was obsessed with his work. He would drive to the shop, about three and a half miles away, around 8:00 in the morning. He did his paying work during the day, with his helpers doing the repetitive tasks and Harry doing everything else. His assistants were, although his employees, essentially partners he consulted with and asked opinions of as well as gave life lessons to. He had a furious pace which no one could keep up with, and was highly skilled at welding. His workers later told me that there were some welds that only he could do, and the underlings really could not conceive of how he did them. I’m told that some welding classes teach the “Bertoia weld,” which is a very elegant and smooth style.

He was superhumanly strong and could be seen carrying around a 300-pound anvil tucked under his arm as if it were a cat. Harry saw lunchtime as an annoying necessity that took away from his work time, and often went to the Bally Hotel for a soup and sandwich. After the work day, he came home to eat Brigitta’s cooking at 5:30. Dinner was always a fun affair full of philosophical topics or current affairs. Then came the three chess games that became the couple’s tradition, with bets of $1 on each game (Brigitta managed to win slightly more often, catching Harry off guard with her quick, startling moves).

Afterwards, Harry would read Time magazine, rest briefly on the couch, and wake up around 9:00 pm. At that time, he went back to the shop and did his experiments and smaller sculptures. He might come home around 11:00 or 12:00, or it might happen that his workers would find him at the shop, disheveled and in the same clothes as yesterday, when they arrived early the next day. If he was on a roll, he could easily work all night without even realizing the time passing. He sometimes took off on a Sunday to walk through the woods with the family, but sometimes not. 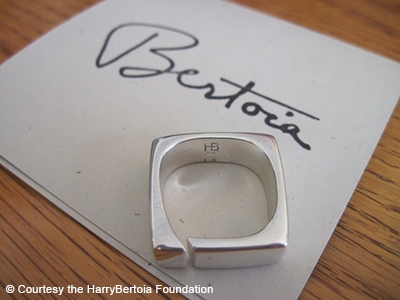 How did his jewelry lay the groundwork for his sculptures?


I see his jewelry as miniature sculptures, similar to Alexander Calder’s. It was at Cranbrook where Harry became familiar with the different metals and their qualities and propensities, which came in very handy in his later career. The clasps and connectors were never merely functional, but blended into the design and stood out as beautiful embellishments rather than clumsy necessities. Some of his jewelry was so large that it could not realistically be worn by any woman, but it was wonderful to look at nonetheless. His handiwork was meticulous, and it was in jewelry that he developed his excellent work habits of attention to detail and invention of new techniques to fulfill the vision of what he wanted the piece to be. Harry was never constrained by boundaries. His jewelry was art you wear, his furniture was sculptural comfort, and his Sonambient tonals were sculpture to hear, touch, and see. Someone asked him what he preferred to be referred to as—artist, designer, sculptor? He replied, “I am a metal worker. I work with metal.” He was not just a designer, or just a sculptor, he did whatever was required to complete the project.


What were some of your childhood memories of his sculptures?


A time or two every summer, the family would walk the three-plus miles to the shop. Harry would stop whatever he was doing to show us around. The shop was sort of dilapidated and in disrepair, so it was really fun for children. Going down the lower level, one had to be careful of broken steps and wobbly railings: very spooky and exciting.

And to see my father’s huge architectural projects—it was astounding! They seemed to me to be like half-birthed creatures, ready to pop to life. When they were working on a monumental fountain piece for the Philadelphia Civic Center, outside due to its rambunctious size, the copper tubes were all curvy and shaped sort of like a big monster, but not a mean monster, a good one. Maybe more of a magical dragon. It was a wondrous event to visit the shop. I didn’t totally understand why he was making big metal things, but I thought it was great. I instinctively knew that it was what he was supposed to be doing. He was always happy to show us around, so I knew it was a good place for him to be.


Below are photos of Stanley Anderson's Bertoia collection at his Palm Springs residence. 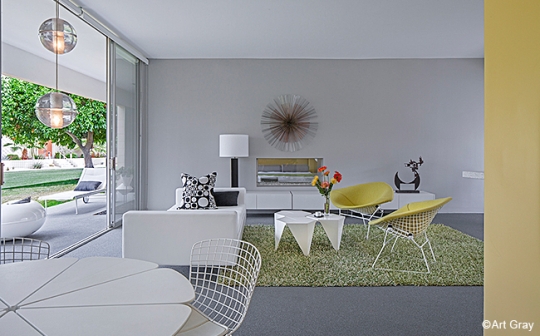 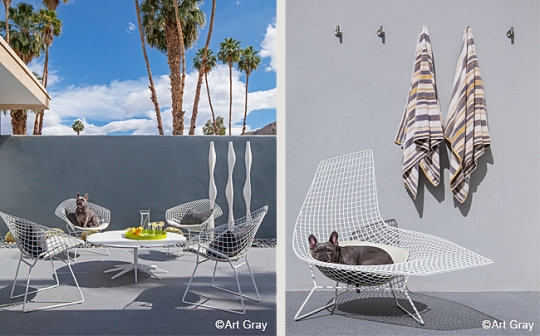